*This post was made around the beginning of January (look on the top haha)
and whats weird, is the fact that its a popular subject now*
Don’t you just hate hearing that? That the makeup you are doing or have done is not gyaru and this object is not gyaru and that -“Gyaru is not just circle lens and lashes. You need blush , contour and nude lips, this style that style these shoes”
That is just weird because remember that picture I posted some post ago post? (in january)

I will only talk of the makeup cause that is my …..third specialty
(First artist, second cosplayer, back to topic).
And to a bit of a point – I’m just showing how confusing the Gyaru style is.

I do not own this picture; Its been grabbed from internet (more likely tumblr)
With the over exposure, where is the contour? How about the blush? Maybe the nude lips?
When it comes to her makeup she is gyaru even without the other elements and a majority of people would agree. All she has is eye liner and lashes; don’t forget the Circle lens.

I do not own this picture; Its been gained from internet gyaru inspiration
How about this; it is known for gyaru makeup to have the droopy puppy eye makeup
or its the most popular, the same for false bottom eye lashes but so far she has none;
the contour is hardly noticeable, there is a red lip
and i’m not sure if she has blush, yet she give off that gyaru vibe don’t she?

So what is there for makeup other than contour, blush, and nude lips.
As you can see its not that much of a deal in those pictures or anything similar
(especially if Asian). Believe me there are so much pictures like this and it is considered gyaru.
(even when the makeup elements are there, you hardly can see the makeup)
Im thinking dark makeup most likely heavy, top lashes full, bottom lashes apparent, eyeliner,
circle lens and lots of light……exclude that last one.
But to the point do you think it is the
Asian features that makes Gyaru makeup right all the time for Asians?
People forget we do have different features from Asians 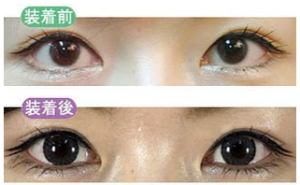 Or what about when the style changes, who make up the rules to what is what and what is not?
How about the basics….
what are the few things that have never changed for the Japanese gyaru makeup?
-Of course the liner
-we also have the lens
-Lashes as well
But what makes it different from the American culture? Only thing that is different here is the circle lens (and maybe bottom lashes which is not an everyday routine). Contouring is nothing new and so isn’t the blush, the lips and also (top) lashes.
Are you confused now?
So am I so we have to go way back, back to ganguro. 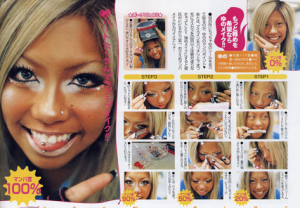 I KNOW ITS MANBA !!!!!
Just take out the nose stripe, that is not the point.
The main point of this is different am I right? To be different.
Right now that is what circle lens do for us here in the states.
And there are so many categorizes in gyaru that is so far from one of the first types of gyaru
and compared to now its a look that is an everyday any girl look
who knows how to do their makeup well.

So what else is there? 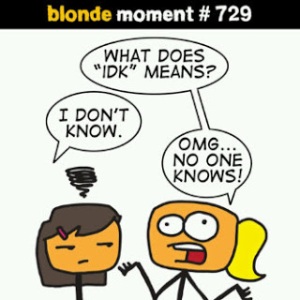 well…. The eye shape. Think about it
not much people who do makeup in the states
want to change their eye shape…they accentuate it .
These girls (Back then Original Gyaru)
didn’t accentuate they would changed their eyes completely.
They would extended it, drop it and even bring it up more.

How to make that modern?
They already have with plenty categories.

I wouldn’t know much cause I don’t know everyone’s face shape and everything gyaru.
But for me its all about lining my outer eye shape to another extended shape.
Speaking of the categories in Gyaru, have they seem more American eagle?
We also have the “Spencer’s” gyaru looks and a bit of “hot topics” going on, and yeah forever21.

So in conclusion, gyaru is nothing more than girls in the Spencers/American eagle/ punk rock (and some others to be named) with added circle lens, the usual makeup with bottom lashes and the changes of the eye shape? And that is the only break between ordinary makeup and gyaru makeup? Oh wait some of the new gyaru styles dont require obvious bottom lashes, I forgot (pictures I gave here also prove this)…and some styles are completely natural with makeup applications so lets start over.

So in conclusion Gyaru is nothing more than girls in the Spencers/American eagle/ punk rock (and some others to be named) so basically all and any fashion with added circle lens?
…Yeah, there you have it.

Gyaru: Any style any makeup…just make sure you have them circle lens on
to look a bit different.

Maybe you should figure that out because in the end
it is your face and you make your own face rules.
Though if you look like an ordinary girl….
Why should you call yourself gyaru? What makes it so?
Ask yourself these honest questions?

Thanks for reading the way I think.❤

Like a shark for experimentation
So hey start the new years with some things about me right?
And later on I can show some eye makeup experiments
here we go…..

I was tagged by Anjell
and she tagged everyone else I know
…so not sure if im going to send a tag out
…ill feel awkward haha.
1. Whats your new years resolution? why?
I dont really have one cause I was told why start on new years , start any time of the year so I did. Im on the healthy path, im still natural haired and getting more creative with my OC and art (art is the biggest) So ill keep to that all year long lets see.
2. Favorite Hobby?
Eating (cant say art) and casual gaming

3. What movie best describes your personality?
hmm….damn that is hard. Inception, because I daydream way too much so when it is reality it feels dreamy, if that makes sense

4. What toy did you play with as a child?
Does a Binky counts. Its my piece of cloth im always with and have to sleep with.
Have to be silk and long, have one still.
If not then barbie.
I designed and made clothes for them and made for other friends as well.
I should of been a fashion designer I never noticed till now haha.
5. First Hollywood crush?
Oh I know, Orlando bloom.
6. Favorite song of 2011?
Well artist discovered: Todd Edwards
Song I guess is: Gyal In Front Ah Meh by “Ziggy Rankings” for now

7. If you were stuck on a stranded island, and could only bring two things, what would you bring? I would say family but dont want them to suffer & the same with my dogs, so computer with power and internet (at least I can contact for help) and survivor man skillz (if it comes in a can you can drink and learn from).
Im cheating aren’t I?

8. What’s your biggest pet peeve?
Two on the same level
– Things that dont go to plan what if its people, weather, but MOSTLY people
– And having only the biggest baddest, rudest people go further than the nice, loyal, talented and honest people
9. Any bad habits?
The internet
10. Biggest Inspiration? Why?
Life. If I forget it is there ill waste it. I dont want to do that I want to live it, safe but to the fullest. Life has Colors , Fashion, Art, taste, smell, and that sky. Now how can you not be inspired by it? Yeah it has its boils but you can look past that.
(Im real sleepy, what kind of shit im talking)

11. First pet’s name? Why?
Herby. I dont know, just know it was my first pet hamster.
The pet I named was bing bing and it was a Guinea pig, and if you know guinea pigs they have nice firm cute bing bings >.<

12. What does your name mean and why were you named it?
Well my name (Phillicia or to others Phylicia/Felicia but at the end its actually “Cee-A” instead of “Shah”)means happy like in “felix (pfft glee)” and greenery….I do adore gardens and natural seasonings?
BUT! My name came from another source which is my mother who had been named after saint Philomena “a young Greek princess” She was 14 when her remains was found. Still don’t know much about her.

But I was named Phillicia with two ls and a Cee-a cause of my father wanting my mothers name, also got his name which is my blog name. Only the Spanish people I meet say phillicia with cee-a at the end…..or was it a french woman?